THE RIVER STINGRAYS!!
River Stingrays are the only batoids (skates, saw fish and sharkes) completely restricted to fresh water habitats. They have a venomous caudal sting, and are one of the most feared freshwater fishes in the Amazon Rainforest. However, they are not dangerous unless stepped on or otherwise threatened.

My name is Fernando Vaca and I am a naturalist guide from the remote Yasuni National Park in the Ecuadorian Amazon Rainforest.
I have been lucky enough to explore this unique wilderness since 1998. I have been discovering its diversity, from tiny ants to elusive jaguars, and sharing these discoveries through the internet. My wish is to continue doing so for many years to come.

https://www.gofundme.com/sharing-yasuni
In order to achieve this goal I would like to buy proper equipment to continue capturing wildlife events to share with you. The equipment needed is:

I would like to gather all your donations by the end of February 2016.

The Yasuni Biosphere Reserve is home to an outstanding diversity of life. It holds about 30% of the mammals of the entire Amazon Basin; about 644 tree species in one hectare; the 150 amphibian species documented to date is a world record among comparable landscapes. Over 560 bird species have been recorded, one of the highest known totals in the world.

The conservation of all this diversity of life is urgent and the public must become more aware of its importance for the sake of future generations.

The Giant Anteater (Myrmecophaga tridactyla) is a largest terrestial insectivorous mammal of the forest; it is one of four living species of anteaters and is classified with sloths in the order Pilosa. With an elegant size between 182–217 cm in length, and with weights of 27–41 kg this ancient creature is wandering the vast and fragile Amazon Rainforest in Ecuador. The Yasuni Biosphere Reserve (Yasuni National Park & Waorani Ethnic Reserve) holds about 30% of the mammalian diversity of the entire Amazon Basin. 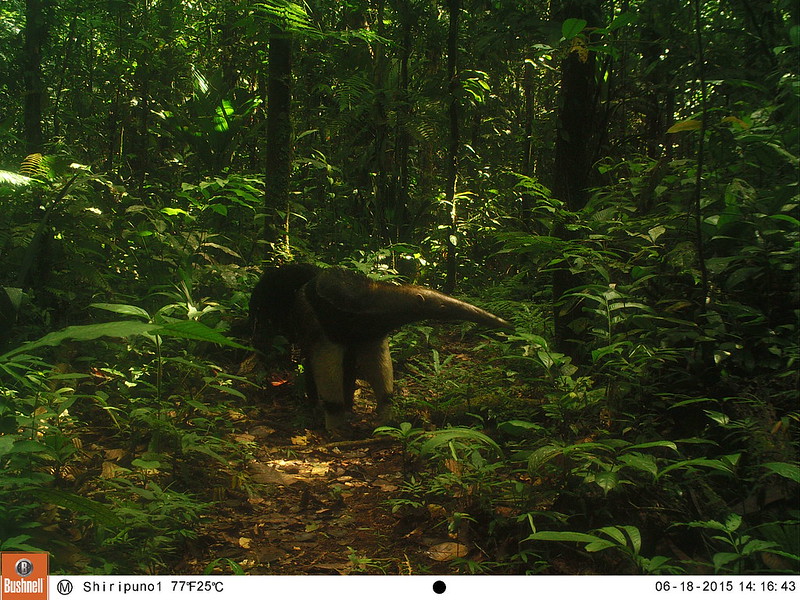 Gian Anteater  feeds primarily on ants and termites, using its fore claws to dig and tear up their nest and its long, sticky tongue collects them. They are mostly solitary except during mother-offspring relationships. Mother anteaters carry their offspring on their backs until weaning them. 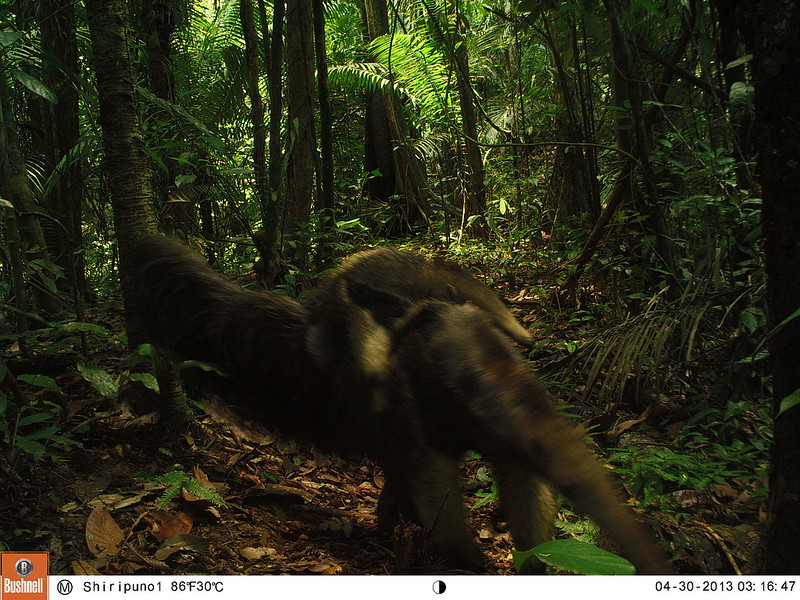 The magnitude of the Diversity of Life of the Amazon Rainforest in Ecuador has become the major Abroad destination in the last years, hundreds of new thinking schools, colleges & universities starting having an Amazon Abroad Programs to promote the Conservation of the largest Tropical Rainforest of our planet.

The alarming rates of habitat loss of the Amazon Rainforest cause by humans development activities is increasing exponential.

Desperate political decision to gain wealth are overtaking this unique wilderness, sadly most of them proof to be completely wrong.The Yasuni Biosphere Reserve is the largest protected forest in the western amazon basin, recently declared as the most Biodiverse place on Earth by many scientists.

The Yasuni is the perfect location to study of natural history of the organism of this fragile ecosystem, many schools with farsighting start organizing field trips to explore the wonders of nature, gather data, run filed observations as many feat naturalist did a few centuries ago.

Come prepare for anything, there is an old tale that in the jungle anything is possible. Get advise on equipment and gear suitable for the moisture  and basic conditions. Very important to get a general description of the location where you going to explore. Don’t forget to have ready your first aid kit.

In the Amazon Rainforest of Ecuador, there is a unique place that holds about 30% of the mammalian diversity of the entire Amazon Basin. Its the world known Yasuni Biosphere Reserve (Yasuni National Park & Waorani Ethnic Reserve), its located between the mighty Napo River and the Curaray River.

Yasuní Biosphere Reserve location nurtures this abundance. The reserve sits at the intersection of the Andes, the Equator, and the Amazon region, an ecological bull’s-eye where extremely rich communities of plants, amphibians, birds, and mammals in South America converge.

The world diversity of mammals are found in the Andes and eastern Africa at the landscape scale. Sit tight because the Western Amazonian forests, including Yasuní Biosphere Reserve, appear to be globally unique in their ability to support at least 200 coexisting mammal species, the Yasuní Biosphere Reserve mammal list contains 204 species,it represents approximately one-third of all Amazonian mammals and 44% of all mammals known from Ecuador (382 sp). Considering that Ecuador has the world’s ninth highest mammal diversity, finding nearly half of the country’s mammals in a single park is remarkable.

The Yasuní Biosphere Reserve has amongst the highest local bat richness for any site in the world . Whereas 117 bat species are estimated to occur on a regional scale within the Amazon Basin, Yasuní is projected to harbor comparable richness on just a local scale.

The Amazon Rainforest has an incredible number of special places commonly known as “salt licks” or “clay licks”. These locations have a high concentration of fossilized mineral which help herbivores to stabilize their digestive system.

These unique sites can be found on our trail network, we spend time waiting to witness these unique events. Although it can consume a lot of time may not end in success, these places are highly recommended for photographers, wildlife expeditions and mammals trackers trips.

Hundreds of White-lipped Peccaries visit these places frequently to get a fine dose of this precious water rich in minerals. Peccaries maintain the balance of the forest in the long run. Their diet consist of fruits, nuts, insects, worns and others forest floor organisms.

Shiripuno Lodge invites you to explore the deep Amazon, away from any civilization, surrounded by miles and miles of unbroken of the Yasuni Biosphere Reserve, away from oil activities, speed boats, noisy barges and other tourists from different lodges of the neighborhood.

Amazon Birding Week – for all kind of birders that would like to have a real Amazon Rainforest exposure, which would include: macaws, toucan, woodpeckers, hummingbirds, antbirds, antwrens and other amazonian specialties. This trip is focusing to add species abundace records through e-Bird

Amazon Nature & Wildlife Photo Week – for all the non-professional photographers that would like you work and spend the time to perform until the perfect shot comes. This trip is focused in creating photo material to promote the Conservation of the Rainforest.

When you plan a trip to the AMAZON please bring only items that you are going to use in the forest; Truly there is not reason to carry all your larger suitcase, leave those in the storage services that many hotels in Quito provide. Keep in mind the following items:
PERSONAL ITEMS
• Long Trousers
• Long Sleeves
• Wind Jacket
• Cap or Hat
• T-Shirts
• Shorts
• Socks
• Raincoat
• Sunglasses
• Bathing Suit
• Insect Repellent
• Personal First Aid Kit
• Zip-lock Bags for wet cloths
• Soap & Shampoo ( Biodegradable!!)

As you see.. there is no reason to bring up your hair drier, music devices and such non-usable items.

The Amazon Rainforest of Ecuador homes a very rare canid, the Bush Dog (Speothos venaticus) it was first describe from fossils in Brazilian caves in 1842 by Peter Wilhelm Lund.

On our Trap Camera Project we were`happy to encounter a pack of two adults and and a young Bush Dogs crossing the trail; from the images we can see they have a brownish-tan fur, with a lighter reddish tinge on the head. They have short legs relative to their body, as well as a short snout and relatively small ears.

We had learnt theirs teeth are adapted for its carnivorous habits, and uniquely for an American canid, a total of 38 teeth. Bush dogs have partially webbed toes, which allow them to swim more efficiently.

Bush dogs ranges from  Central America, through much of South America east of the Andes,They primarily inhabit lowland forests up to 1,900 metres (6,200 ft) elevation, wet savannas, and other habitats near rivers, but may also be found in drier cerrado and open pasture. The historic range of this species may have extended as far north as Costa Rica where the species may still survive in suitable habitat.

Bush dogs  hunt during the day. Their typical prey are pacas agouti and capybaras. Although they can hunt alone, bush dogs are usually found in small packs. The dogs can bring down much larger prey.

Bush dogs appear to be the most gregarious South American canid species. They use hollow logs and cavities such as armadillo burrows for shelter.

We hope to learn more from the Wilderness of the Yasuni before is all gone to fight poverty and inflate somebody pockets, history shows that oils does not solve social problems, it make them worse.

While wandering in the wilderness of the Yasuni Biosphere Reserve, you might have the chance to encounter a group of carnivorous, climbing up the trees to watch you and make alarm calls and desapair in from of your eyes in seconds!

This groups are formed by females and youngs sometimes up to 30 individuals foraging in the forest floor. Males, on the other hand, are usually solitary. Solitary males were originally considered a separate species due to the different social habits and were called “coatimundis”

The South American coati is widespread in tropical and substropical South America. Most of its distribution is in the Amazon Rainforest Lowlands (locally, it occurs as high as 2,500 m or 8,200 ft), Chile is the only South American country with no Coatis!!

South American coatis are diurnal and live in the ground and trees. They are omnivorous and primarily eat fruit, invertebrates, other small animals and birds’s eggs. Coatis search for fruit in trees high in the canopy, and use their snouts to poke through crevices to find animal prey on the ground. They also search for animal prey by turning over rocks on the ground or ripping open logs with their claws.

A Travel Guide to all of them..

The Global Big Day in Ecuador

Opinions, thoughts and adventures of a young conservationist.

Our greatest weakness lies in giving up. The most certain way to succeed is always to try just one more time~Thomas A. Edison

A blog on fish biodiversity

Quinta Mazatlan is a Mansion with a Mission... Restoring One Backyard at a Time! The urban sanctuary works to enrich people's lives by sharing knowledge about birds, plants, and environmental stewardship in South Texas.

Every picture tells a story

What goes on in my mind